When Donald Trump announced his run for president in 2015, he began his speech by stating with unwavering certainty that the American Dream was dead.

The actual term “The American Dream” was coined by a man named James Truslow Adams, a Pulitzer Prize winning author.  He was, however, much more than a writer.  Adams graduated from Yale University in 1900 and made a name for himself in the world of investment banking. He eventually became a partner in a New York Stock Exchange member firm.  In 1918 after working under President Woodrow Wilson to prepare for the Paris Peace Conference, he became a captain in the Military Intelligence Division of the General Staff of the U.S. Army.  He was the son of a Venezuelan immigrant.

“That dream of a land in which life should be better and richer and fuller for everyone, with opportunity for each according to ability or achievement. It is a difficult dream for the European upper classes to interpret adequately, and too many of us ourselves have grown weary and mistrustful of it. It is not a dream of motor cars and high wages merely, but a dream of social order in which each man and each woman shall be able to attain to the fullest stature of which they are innately capable, and be recognized by others for what they are, regardless of the fortuitous circumstances of birth or position.”​ -James Truslow Adams, 1931

This definition is eerily relevant today.  When President Trump referenced the revival of the American Dream on January 30, he was talking about a better environment for small businesses.  While an economic environment conducive to small business has become a part of how we have come to understand the American Dream, it is not and has never been the most important part, nor has it been what has drawn masses of hopeful and eager dreamers to the United States. 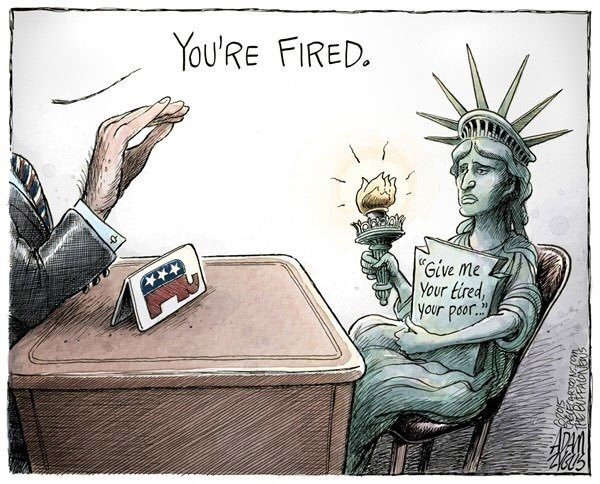 “Give us your poor, give us your tired.”  There are endless quotes we could pull from history that solidify the horrific reality that our America today is not of the same ethos that it once was.  Yes, racism has always threaded our societal fabric, but not since the horrors of Japanese Internment has our government told masses of people that they are unwelcome the way it has in the past eight months, specifically in the past two days.

DACA (Deferred Action for Childhood Arrivals) was the official extension of Adams’ American Dream to all young dreamers who bravely made this land their home.  DACA was supposed to be the hand pulling young hopefuls into the social order that allowed them to attain all of which they were capable.  It was supposed to recognize young immigrants for what they were, regardless of the circumstances of their birth.  DACA is now gone and therefore, so is the American Dream.

Regardless of what anybody will tell you about small business environments, do not forget that President Trump crushed the real American Dream in one fell swoop this week.  The repeal of DACA gives nothing back to the documented citizens of this country.  It does not raise our wages, it does not improve our highways, it does not strengthen our communities.  In fact, Forbes published an article just before the inauguration detailing how the repeal of DACA would be incredibly costly to the U.S. economy.

I am left stunned by the lack of compassion and the pigheaded assertion that this new American Dream is only extended to those with the right circumstance of birth.  Regardless of which definition you go by, the central idea of the American Dream is that you are not tied to your life as it stands when you are born.  As has been said about many decisions in this administration, do not normalize this hate.  It is an outright act of defiance in the face of tolerance.

The American Dream is dead.  Defend it here:  http://weareheretostay.org/

Originally published on Sep. 05, 2017 on Her Campus UConn